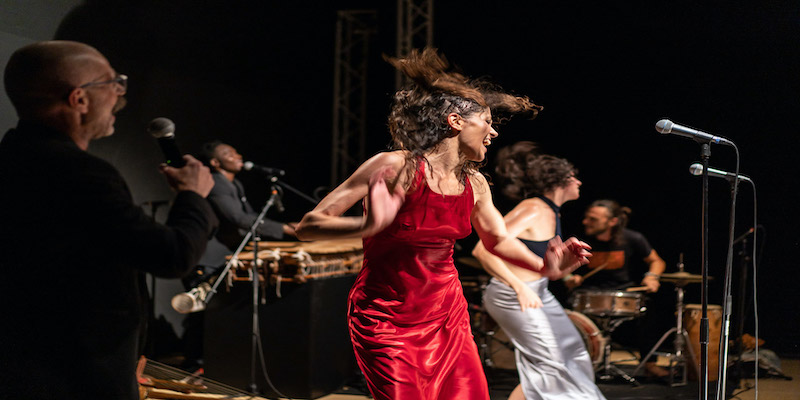 Sunday 1 August at 9.00 pm meeting between cultures with MBIRA, the show by Roberto Castello finalist at the UBU 2019 Awards as best dance show.

How much has Africa contributed to making us who we are? Using music, dance and words, MBIRA, a concert for two dancers, two musicians and a director, attempts to take stock of the complex relationship between our culture and that of Africa. Mbira is a word around which a surprising amount of stories, music, dances, parties and reflections on art and culture are intertwined that form the plot of a show that, combining styles and forms, meticulous scores and improvisations, writing and orality, contemplation and game, has as its inevitable ending a party.

For many centuries, Europeans and Arabs have explored, colonized and converted every corner of the planet. Today many cultures are lost and the Western one has become in many ways the universal reference. It is impossible to say if it is good or bad or to know if the colonized before colonization were more or less happy. The fact is that the world is getting smaller and less varied, full of televisions that broadcast the same programs and identical shops that sell identical products from Greenland to Tierra del Fuego, from California, to Madrid, to Riyadh to Tokyo. But often in the colonization process it happens that the conqueror changes irreversibly by coming into contact with the culture of the conquered.

Mbira is the name of a musical instrument from Zimbabwe but also the name of the traditional music that is produced with this instrument.

"Bira" is also the name of an important festival in the tradition of the Shona people, the main ethnic group of Zimbabwe, where people sing and dance to the sound of Mbira. Mbira, however, is also the title of a musical composition from 1981 around which a controversy arose that well represents the extreme problematic and complex nature of the cultural and moral tangle that characterizes the relations between Africa and Europe.

Mbira is, in short, a word that offers an ideal pretext to talk about Africa and to highlight how little, guiltily, is known, in the belief that the most subversive gesture today is to remember that, before affirming certainties, in generally it would be wise to know the subject being talked about.

Projects like Mbira, on the other hand, are born for all those places where there is a desire and need to be distracted, have fun and feel good without necessarily stopping to think or ask questions about one's role and relationship with others.

ROBERTO CASTELLO (1960), dancer, choreographer and teacher. It is probably to be considered the most ideologically committed among the choreographers who founded contemporary dance in Italy. In the early 1980s he danced in Venice in the "La Fenice Theater and Dance by Carolyn Carlson", where he made his first choreographies. In 1984, he is one of the founders of Sosta Palmizi. In 1993 he founded ALDES.

He receives several awards, including the UBU Award in 1985, 2003 and 2018 (“Il Cortile” / “The best of all possible worlds” / ALDES project). Since 1996 he has been curator of various events and reviews and, from 2005 to 2015, he is a teacher of digital choreography at the Brera Academy of Fine Arts in Milan. Since 2008, with ALDES, he takes care of the “SPAM! network for contemporary arts ”in the province of Lucca, hosting residences, a multidisciplinary program of shows, workshops, educational activities, meetings. In 2017 he created and edited the blog "93% - materials for a non-verbal politics" (www.novantatrepercento.it) a platform for reflection, comparison, and exchange of materials on non-verbal language. During his career, he collaborates, among others, with Peter Greenaway, Eugène Durif, Rai3 / Fabio Fazio and Roberto Saviano, Studio Azzurro.

ALDES supports the critical information work of the Nigrizia magazine, to which the proceeds from the sale of the show's t-shirts go; thanks to the Odissea Social Cooperative.