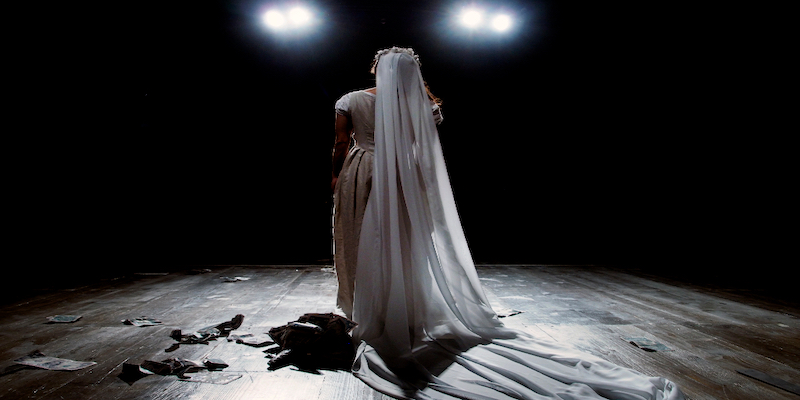 On Friday 23 July at 9.00 pm the Theater of Places Fest hosts LA SIMPLICITA 'INGANNATA, Satire for actress and puppets on the luxury of being women, the show by Marta Cuscunà scheduled as part of the AIDA Showcase (Adriatic Identity through Development of Arts), a project co-financed by European Union under the Instrument for Pre-Accession Assistance (IPA II) Interreg IPA - CBC Italy - Albania - Montenegro

Freely inspired by the literary works of Arcangela Tarabotti and the story of the Poor Clares of Udine THE SIMPLICITY INGANNATA is a story of female Resistances.

A show that talks about the collective destiny of generations of women and the possibility of forming a 'choir' to change it.

In the 1500s, having a daughter was a problem: in the eyes of her father, it was a part of the economic assets that went up in smoke at the time of marriage. Having a daughter was equivalent to an economic loss. Certainly a beautiful daughter was economically advantageous, because she could be married with a modest dowry, while a daughter with some physical defect necessarily involved more expensive outlays. Unfortunately, however, in times of economic crisis, the marriage market suffered a collapse and an alternative solution had to be sought to accommodate the daughters: forced monastication.

THE RESISTANCE OF THE CLARISSE OF UDINE. The nuns of Santa Chiara di Udine implemented a truly unique form of Resistance. These women transformed the Udine convent into a space of contestation, of freedom of thought, of the desecration of religious dogmas and of male culture with a cultural fervor unthinkable for the female universe of the time. Obviously the Inquisition tried hard to re-establish an iron control over the convent and that community of nuns, but the Poor Clares managed to resist for years by making fun of male power and creating, inside the Santa Chiara, a surprising alternative for a society in which women were excluded from every political, economic and social aspect of life.

SIMPLICITY DECEIVED TODAY. Today there is an extreme need to talk about female resistances because in our society the female figure is very contradictory: on the one hand, there is a need to ensure by law the minimum presence of women in politics through women's quotas; on the other hand, women are at the center of media life as a bargaining chip between corrupt politicians and entrepreneurs. Simplicity deceived tells from which seeds the claim of women in the sixteenth century was born, in an attempt to give new impetus to a revolution we no longer feel the need for, perhaps not by chance, but by a precise strategy which, even if in an apparently different, still crushes under the male dominance.

"The deceived simplicity - explains Marta Cuscunà in her director's notes - is not a documentary but an artistic project where the theater is also the possibility of betraying certain data or at least of considering certain data as a starting point [...] In this project I tried to elaborate some sides of the story that really happened with analogies that made them more contemporary and closer to us spectators of the twenty-first century. This is why I tried to ensure that concepts such as "heresy", "dowry" also take on other meanings, wider than the literal ones and that the "forced nun" becomes a non-exclusive symbol of the female condition as a whole. A condition that still needs redemption. Simplicity deceived speaks of the collective destiny of generations of women and the possibility of becoming a "choir" to change it ".

by and with Marta Cuscunà